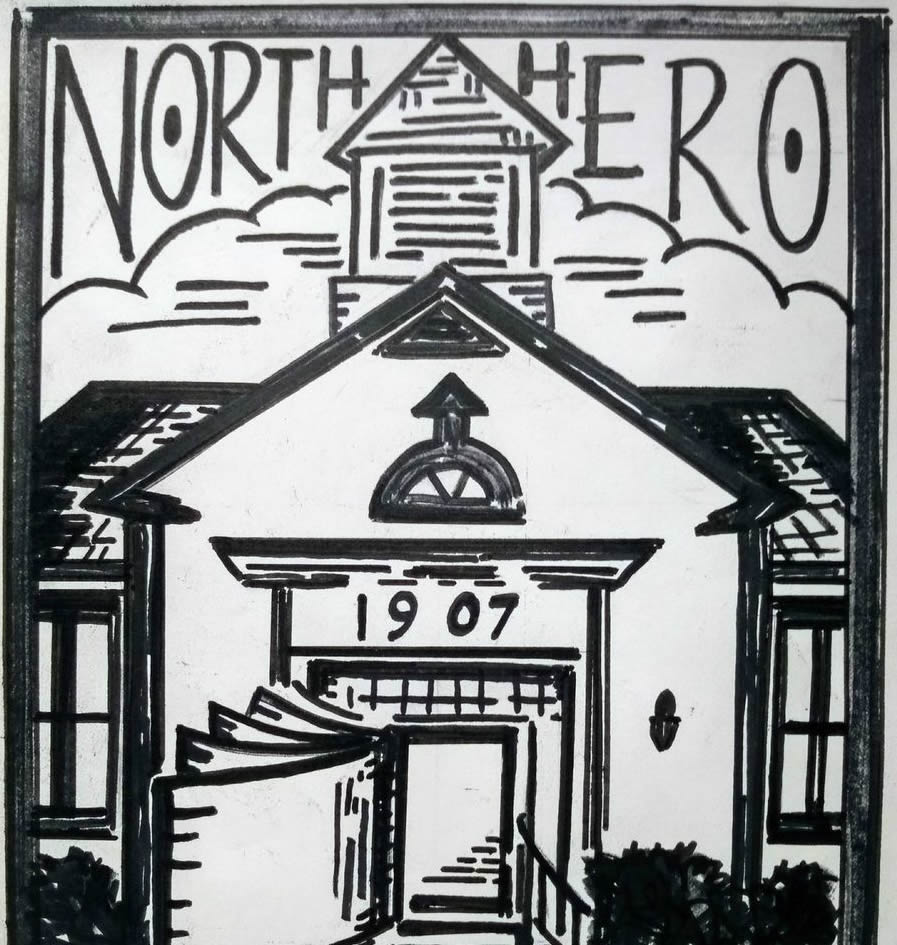 The North Hero Public Library was voted into existence at Town Meeting March 4, 1913. Maintenance of the library was financed by a $15 appropriation with the trustees instructed to apply to the State Board of Library Commissioners for state aid. The Library was housed in different homes for many years. The town’s first librarian was a trustee, Mrs. Charles Tudhope. She was followed by Ruth P. Allen, Evelyn Tudhope, Maude Hicks, Lois Trombley, Mabel O’Neil, Lois Trombley again, and Linda Hazen Norris. They were followed by Mrs. Catherine Tudhope, Joyce St. Peter, Jeanne Giard, Barbara Mooney and Judy Poquette.

With the completion of the Town Hall, the library found a home in the basement. While it was no longer necessary to cart books from house-to-house, there was one major drawback – dampness. In 1938, librarian Allen wrote, “I wish something could be done about the library’s 2218 volumes now shelved in a damp room which will eventually ruin these books.” One librarian, Linda Hazen Norris served when she was a high school senior. At that time, in 1962, the library was only open for an hour and a half on Thursday nights. The town appropriation for the library was $76 and the salary was $2.00 a week. By 1971, the hours had changed to Saturday mornings. During the forty some years of the library being in the Town Hall, there were sporadic efforts to secure a more appropriate location. Dampness and the increasing number of books and readers, made it increasingly obvious that a solution must be found.

The formation of the Friends of the Library, led by Mr. and Mrs. Henry Ratner, aroused interest in restoring the vacant and deteriorating “City Schoolhouse”. At a special Town Meeting, in May of 1979, the town voted and appropriated funds to restore the old school house. With the cooperation of the community, the library moved to its new quarters in 1980. The Governor, Richard Snelling, spoke at the dedication ceremony held on August 27. In 1989, the town voted approval of the use of the schoolhouse’s north room for the library. This added much needed space for the growing collection and for the cramped children’s area. There was now room for storage and a work area. It also allowed a more spacious and attractive facility.

While it was not feasible to preserve the original interior, all was not lost. The original old pressed tin ceiling still serves. The exterior is little changed. However, if one looks closely, they will note the missing piece of fascia by the front door has been displaced.